WE HAVE DOGS IN THE FIGHT AGAINST POACHING 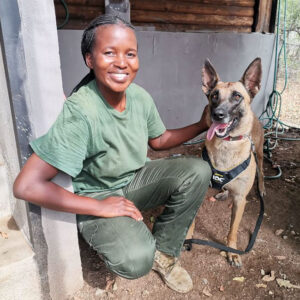 The Endangered Wildlife Trust supports anti-poaching initiatives in game reserves using tracking and detection dogs known as conservation K9s. A project generously funded by the IUCN Save Our Species Rapid Action Grant and the European Union has enabled us to deploy six new dogs over the past year into priority reserves in Limpopo and the Eastern Cape. Although the grant period has ended, the EWT continues to support the reserves to ensure continuity and sustainability of the use of dogs to support their rangers, and our Conservation K9 Project Coordinator, Shadi Henrico, recently visited four of the dogs posted in Limpopo.

Ruger, a male Dutch Shepherd, and Bekah, a female Belgian Malinois sponsored by Global Conservation Force, were deployed to a big five reserve in June 2022. As tracking dogs, Ruger and Bekah walk daily patrols along the fence line with their handler Precious, sniffing out evidence of illegal infiltrations into the reserve that may be related to poaching activity. If someone has entered the reserve through the fence, these dogs will detect their scent and can follow the route they took, allowing Precious to find the trespasser and uncover the intentions behind their incursion. 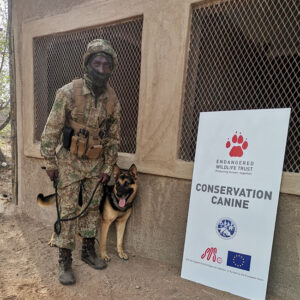 Gold, a certified detection dog, was deployed to another big five reserve in August 2022, where he is finding his feet and bonding with his newly qualified handler Clifford. Clifford was trained at Genesis K9 with support from the IUCN SOS and the EU, and works with Gold to screen vehicles at entrance gates and other locations to ensure that no contraband is smuggled into or out of the reserve. Gold’s sharp nose can detect firearms, ammunition, rhino horn, elephant ivory, pangolin scales, and lion bones and will immediately alert Clifford if he catches a suspicious whiff so that they can investigate further. 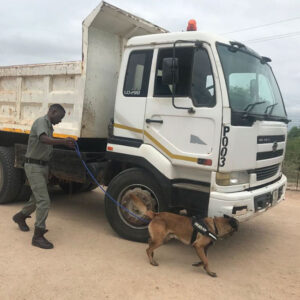 Juice, a large male Malinois, has been deployed to a reserve in the Associated Private Nature Reserves (APNR) adjacent to Kruger National Park, where he is screening vehicles entering and leaving the reserve. He has been partnered with Kaizer, an experienced dog handler and will be working hard to catch wildlife traffickers. Like Gold, Juice will focus on detecting firearms, ammunition, and threatened wildlife species.

This project is supported by the IUCN Save Our Species Rapid Action Grant, co-funded by the European Union, Global Conservation Force, and Genesis K9.