The Lettas Kraal story began a long, long time ago, with the folding of the Cape Fold Mountains that formed the spectacular landscape we see in much of the southern and western Succulent Karoo today. The ancient history of the geology of the region is written in stone, manifesting itself as the diverse, often tortured-looking, rugged topography of the Karoo.

Lettas Kraal, located in the Little Karoo near Touwsriver, has its own story to tell, not all of which has been heard. We don’t know much about Griet, the Lettas Kraal farm ghost and her little dog, who allegedly walk the road to the ruin of her old cottage regularly. Her chapter may well be lost in time. We do know that long before Griet called Lettas Kraal her home, San hunter-gatherers left their artistic legacy in the form of beautiful paintings in secret places on Lettas Kraal. Alongside the various human footprints left over time, small padded tracks, barely visible, were also being left on Lettas Kraal by one of the rarest and most historically interesting of southern Africa’s mammals. The hide-and seek-champion of the Karoo, the Critically Endangered Riverine Rabbit, remained undetected on Lettas kraal until its presence was revealed two years ago with the discovery of a Riverine Rabbit roadkill near the Lettas Kraal homestead. This elusive species has been lost and found several times since it was first discovered in the Karoo in 1901, but that’s a story for another day.

Because of a “love at first sight” encounter more than 20 years ago, this spectacular landscape with its incredible biodiversity, Griet’s story, and the survival of the Riverine Rabbit on Lettas Kraal, will be protected into perpetuity. Lettas Kraal, which has been carefully conserved and nurtured for over two decades, is at long last in the process of obtaining formal recognition as a Private Nature Reserve. This part of the story started 24 years ago. 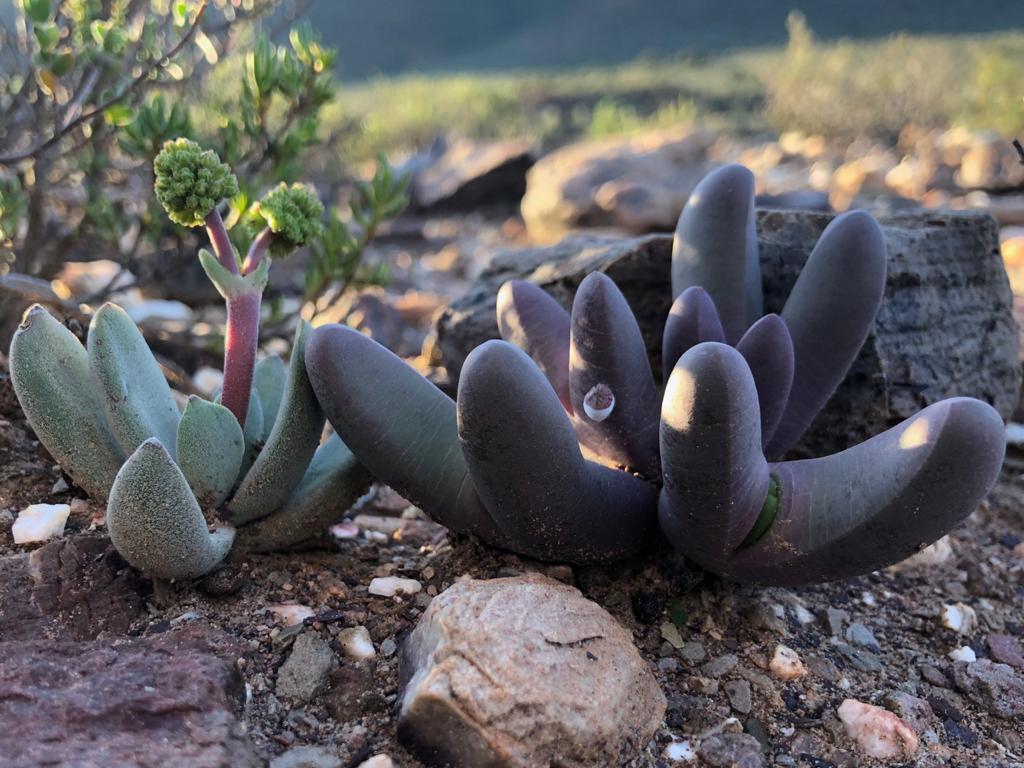 Johan Roodt, owner of Lettas Kraal, visited a neighbouring farm in 1996 and, in his own words, fell in love with the area at first sight. As fate would have it, just two weeks later, Lettas Kraal came up for sale. It was a match made in heaven. The property was heavily utilised as a commercial small stock farm in the past. However, from the start, Johan’s vision was to dedicate the property to the conservation of this region’s unique and highly threatened biodiversity. As such the veld has been rested from livestock grazing for the past 24 years. Although game, including eland and gemsbok move freely over the property, which is not game fenced, they occur at a low density. The removal of livestock and the prevailing low game numbers has allowed the vegetation to recover. Very little trampling of the veld is evident, and the healthy living soil crust comprised of tiny plants and lichens and moss is testimony to the recovery that has taken place, despite the severe drought that has plagued the region for several years. Skeletons of Karoo are proof that Lettas Kraal was not spared from the severe drought. However, following good rains this year, seedlings can be seen germinating all over, and life is rapidly returning to the veld.

The topography of the property is diverse, ranging in altitude from about 670 m above sea-level in the valleys to mountain peaks over 1,200 m high. The varied topography yields a wide variety of habitat types, in turn supporting a fascinating range of plant and animal species. The main vegetation types that occur on the property include Matjiesfontein Quartzite Fynbos, Matjiesfontein Shale Renosterveld, and Western Little Karoo. Only a small portion of the farm (less than 50 ha), is used for farming operations, including some irrigated grazing, horse paddocks, and an olive tree orchard. The farm has its own artisanal olive oil press, which produces highly sought-after olive oil for the boutique market under the Lettas Kraal label. Lettas Kraal is also the location of an approved African Horse Sickness Quarantine Station for horses moving into the horse sickness controlled area in the Western Cape, and the horse sickness free area in Cape Town. Johan also stables his dressage competition horses, which compete in the top rankings in South Africa, on Lettas Kraal. The rest of the 7,000 ha property is dedicated to conservation, and Johan approached the Endangered Wildlife Trust (EWT) and CapeNature to formally secure the protection of this unique piece of land.

Lettas Kraal lies within the Succulent Karoo Biome, recognised as a global biodiversity hotspot. In addition to the biodiversity value of the property, Lettas Kraal also borders the spectacular Anysberg Nature Reserve, and when declared, will expand the existing protected area considerably. The EWT carried out a small targeted camera trap survey in 2019 and confirmed the presence of Riverine Rabbits on Lettas Kraal. After consideration, the provincial conservation authority has given the green light to proceed with the declaration. The Endangered Wildlife Trust is partnering with Lettas Kraal to complete the declaration process, and carry out surveys to develop comprehensive species lists for the property. 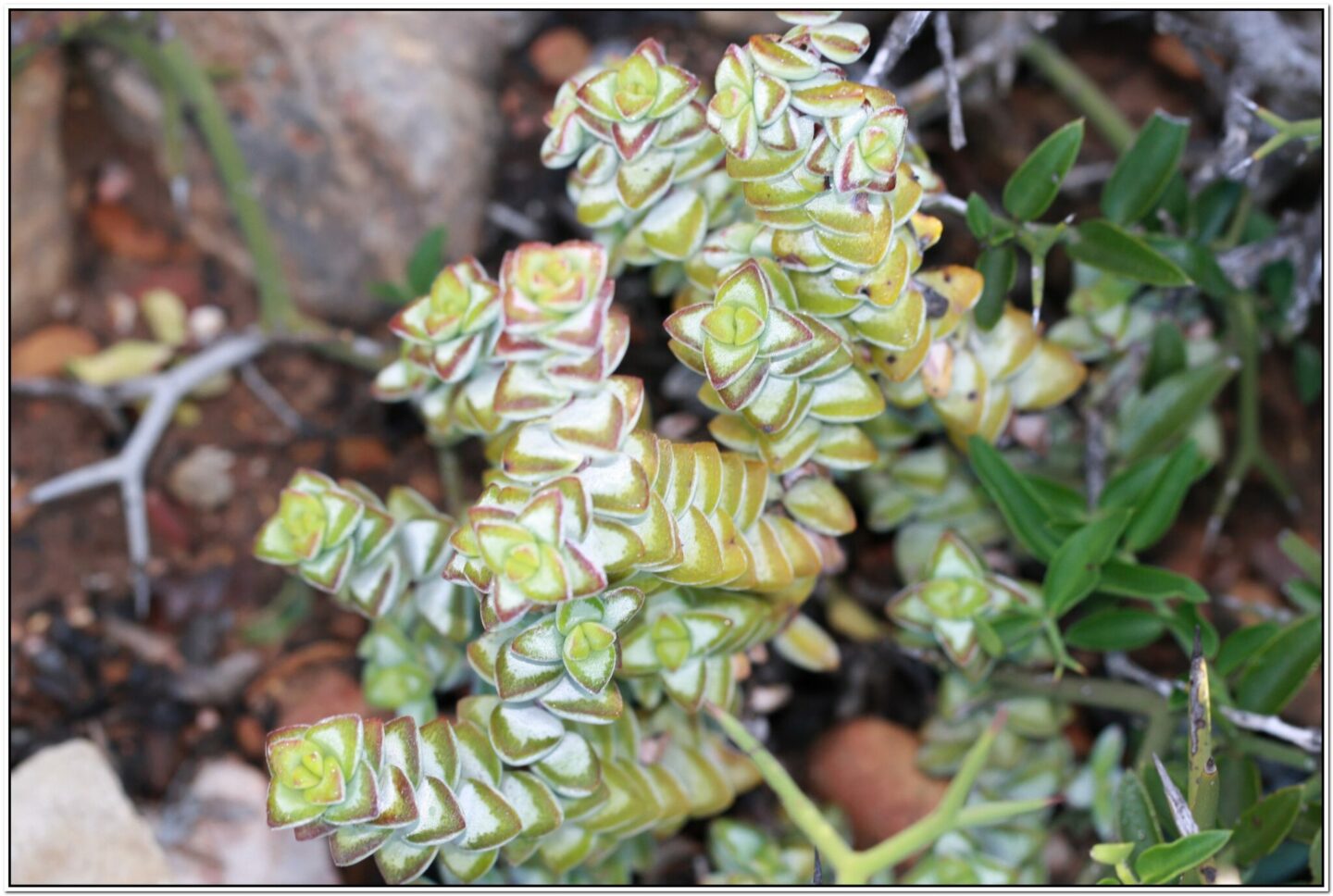 The first step to developing an inventory of all things great and small on Lettas Kraal took place in July. An intrepid group of very determined conservationists went head-on with a mammoth cold front, racing the weather to place 98 camera traps on Lettas Kraal to survey biodiversity. EWT’s Bonnie Schumann and Esther Matthew headed the expedition. Johan and his wife Tessa (who also hiked with teams), and good friends Renier Balt and his wife Millene, managed travel logistics on the farm, to ensure teams could access all the camera stations by the fastest routes possible. 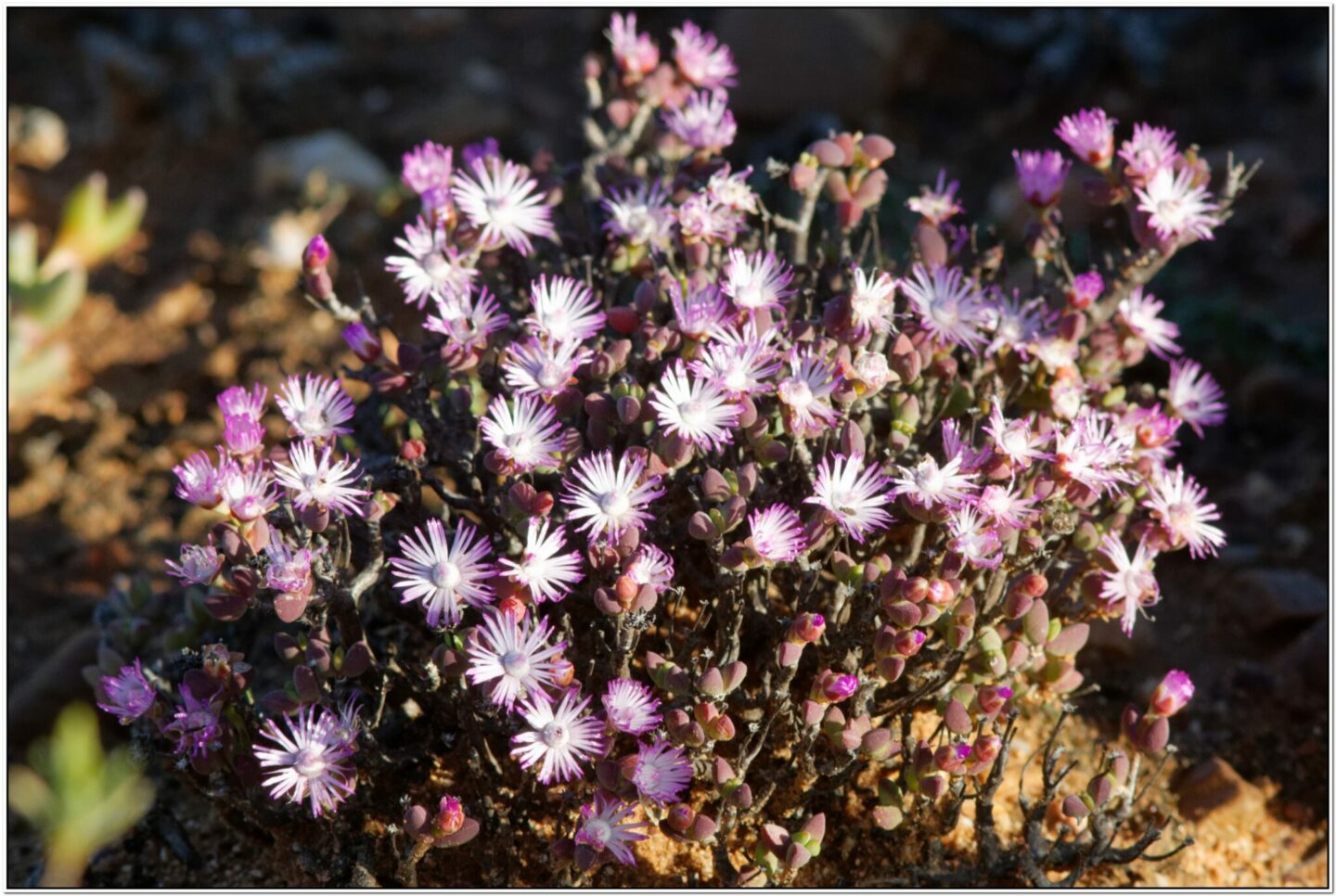 Marius Brand and his team from the Anysberg Nature Reserve lent a much appreciated neighbourly hand, helping to carry the heavy stakes for the cameras, and sharing expertise placing cameras in this rugged terrain. Certain camera stations were placed to target leopards, with two cameras being placed opposite one another, to enable individual identification of any leopards photographed. The Cape Leopard Trust’s Anita Wilkinson and Jeannie Hayward joined the expedition to share their leopard (photo) capturing expertise. Sites needed to be carefully selected to increase the odds of capturing images of these elusive carnivores. Carina Becker, Manager of the Rooiberg Breede River Conservancy (which is supported by the Leslie Hill Succulent Karoo Trust from WWF-SA), also joined the expedition, both gaining and sharing experience in camera placement. Teams hiked up to 14 km a day, through rugged terrain and in freezing temperatures, managing to finish the placements in just two full days, proving the adage that “many hands make light work”.

And so begins a new chapter in the Lettas Kraal story. Partnerships between private individuals, provincial conservation authorities, and NGOs are critical to ensuring that South Africa’s biodiversity is adequately protected. The Biodiversity Stewardship Programme is the perfect tool to facilitate this vision of extending biodiversity protection outside of the state-owned National Parks and Nature Reserves. Private and communal landowners and users are the custodians of most of our biodiversity, and the biodiversity stewardship mechanism offers the opportunity to formally recognise their valuable role in ensuring ecosystem functionality and critically important biodiversity conservation across landscapes and biomes. The EWT Drylands Conservation Programme’s work is made possible through the support of, and partnerships with, landowners. 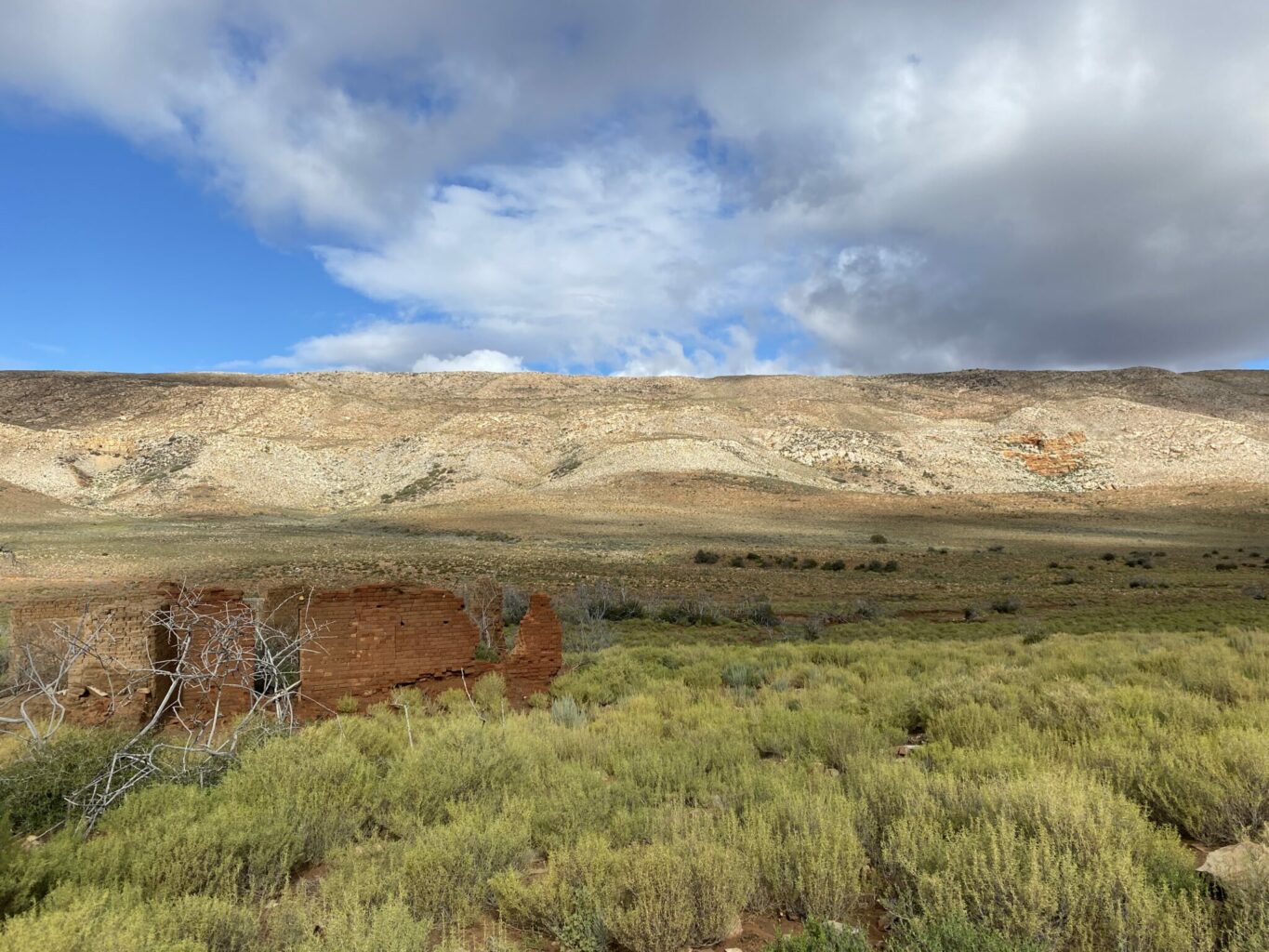 Our broader work in the Drylands landscape forms part of the Global Environment Facility (GEF5) funded Sustainable Land Management Project at the United Nations Development Programme (UNDP), in partnership with the Department of Forestry, Fisheries and the Environment (DFFE). Projects are also supported by Rand Merchant Bank.