IN MEMORY OF BRIAN BRADFORD GOODALL 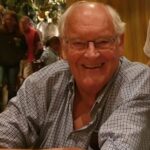 On Sunday 27th June 2021, Brian Goodall, Chair of the Lewis Foundation, loving husband to Lesley, father to Tiffany, Andrew and Peter-John and an adoring grandfather, passed away at the age of 78.

Brian was born on March 27th, 1944.  He matriculated from Jeppe High School for Boys with a first-class pass.  His leadership skills were already apparent as Head Prefect, Captain of the Rowing, House Athletics and Cricket with a basket of leadership and academic prizes.  He attended three universities, graduating with a BA from the University of Natal, a first-class Honours from Wits and an MA from UNISA.  He was a life-long learner and always willing to share and teach.

Brian joined Standard Bank in 1966, where his passion for finance and investment was kindled.  He moved from there to ESE Financial Services and in 1970, Brian and two colleagues formed their own economics and financial consultancy company.  Five years later they sold out to join Syfrets Trust.  Alongside his passion for finance and investment, Brian was developing a career in politics.  His charm and people skills, combined with an intense aversion to the apartheid regime resulted in him winning the Edenvale Parliamentary seat for the Progressive Federal Party in 1979.  This was the first Parliamentary by-election defeat for the National Party. He resigned from Syfrets to pursue a full-time political career and held the seat till 1987 when he lost to Joan Hunter. Undeterred he retook the seat in 1989 and held it until he was elected to the Provincial Parliament of Gauteng as Leader of the DA Caucus and spokesperson on Economic Affairs.

His interest and love for finance could not be ignored however and in 1985 Brian founded Investment Management Services (IMS).  Alongside this he wrote and published several articles on investments and tax.  He was the author of textbooks on investment planning and co-author of the “Momentum Tax and Investment Easiguide” and the “South African Financial Planning Handbook.”

Brian remained actively involved in his company and his writing until his death.  Andrew, his son, joined the company a few years ago and will continue to grow and build on his father’s impressive legacy.

Brian was a man of many facets.  He loved wildlife and the bush and would spend time with his family and friends at his game lodge whenever his schedule allowed.  So, when the opportunity arose in 2002 to join the Lewis Foundation as a Trustee, he was delighted.  He shaped the Foundation’s investment policies resulting in significant growth of the endowment.  He took the helm as Chair in 2010, bringing his insight, creativity and lateral thinking to the table and broadened the outlook of the Foundation.  His greatest contribution was himself.  He was passionate, enthusiastic, positive, forward-thinking, empathetic and committed.  No matter what the organisation or the Foundation had to face, with Brian at the helm, we knew he would see the silver lining and there would be a way through, a plan and a strategy to overcome.  He served the Lewis Foundation for 20 years and will be sorely missed. But his legacy will live on through the programmes and projects of the Foundation and the many young people it has funded and nurtured.  Our thoughts and prayers are with his wife Lesley and the Goodall Family.

The Conservation sector has lost a great champion but his legacy will continue.