shananatkins@gmail.com
Marine biologists from South Africa are participating in an international collaboration to improve our understanding of the conservation biology of the endangered Indian Ocean Humpback Dolphin (Sousa plumbea). They are working together to expedite and automate the process of recognising individual dolphins to facilitate a better understanding of their movements and population dynamics, and to contribute to conservation efforts.

Indian Ocean Humpback Dolphins can be found from the southern tip of Africa to the southern tip of India in a very narrow strip of shallow coastal water. This restricted distribution makes them particularly vulnerable to the negative impact of human activities on the land and in the sea. For example, they die in the large number of gillnets set in this zone to catch fish, while pollution and overfishing are degrading the quality of their habitat. 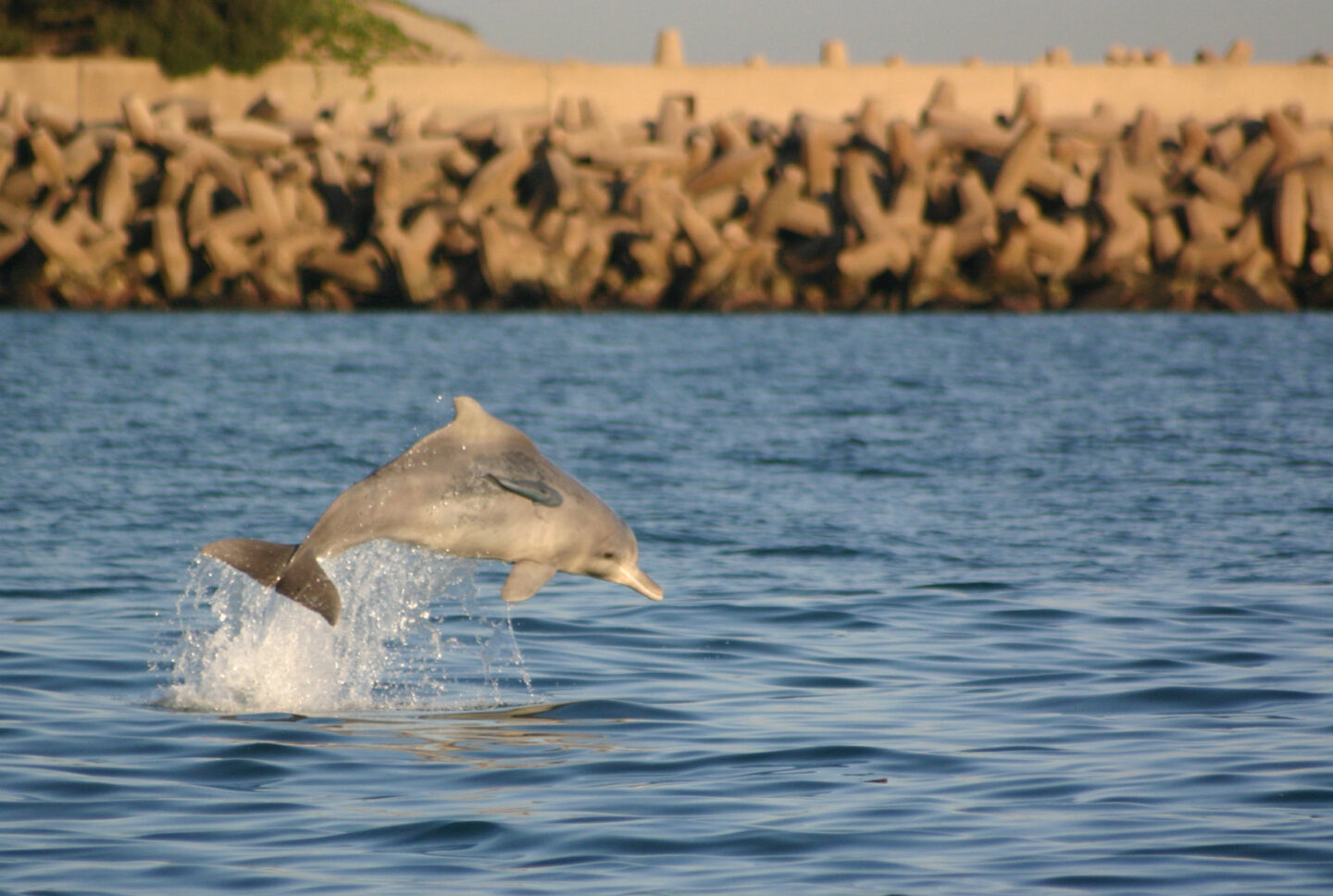 Dolphin researchers throughout their range are concerned about the extinction rate of this species and are working to understand and reverse the situation. They study the behaviour and population dynamics of these dolphins in order to contribute to the design, implementation and monitoring of conservation interventions. To do this, the biologists often need to identify individual dolphins and use a research tool called photo-ID (short for photographic-identification). They take photographs of the dolphins’ dorsal fins and use the nicks and notches, scars and colour patterns on the dorsal fin and body to tell distinctive individuals apart. Once identified, individuals like Zipper, La Linea and Finley Quaid (pictured below) who were photographed at Richards Bay can be recognised over time along the coast.

The process of photo-ID is time consuming. In recent years, photo-ID of various species, including zebras, has been automated. An automation front-runner is WildMe, a non-profit, wildlife conservation organisation, uniquely comprised of software and machine learning engineers. They have been working with leading marine mammal biologists from the Indian Ocean Network for Cetacean Research (Indocet) and the Arabian Sea Whale Network to develop Flukebook, a platform to host and match the ID photos of humpback whales, bottlenose dolphins and whale sharks.  They use algorithms that examine the distinctive features of individual animals to assess similarity and identify if that particular individual has been photographed before. Humpback dolphin researchers are keen to use this platform too but for a variety of reasons, it is not so simple.

To expedite the process, they gathered all the Humpback Dolphin researchers together to share their photo-ID images. This collaboration involves 35 biologists, from 8 countries (South Africa, Madagascar, Tanzania, Kenya, Abu Dhabi, Dubai, Iran and India), who submitted more than 1,200 photographs of almost 300 distinctive humpback dolphins. This is one of the largest collaborations of its kind.

Details of the collaboration were discussed at the recent International Whaling Commission by the Scientific Committee. They welcomed these efforts to automate photo-ID of Humpback Dolphins because they recognise the dire situation that Humpback Dolphins are in and they acknowledge the critical role that identifying individuals plays in conservation biology. They encourage funding agencies and individuals to provide support for this project.