HOW DID THE ELEPHANT CROSS THE RAILWAY LINE?

Hannah de Villiers By walking across, of course! Below you can see a breeding herd of elephant in the Balule Nature Reserve (part of the Greater Kruger) casually walking over a railway line. 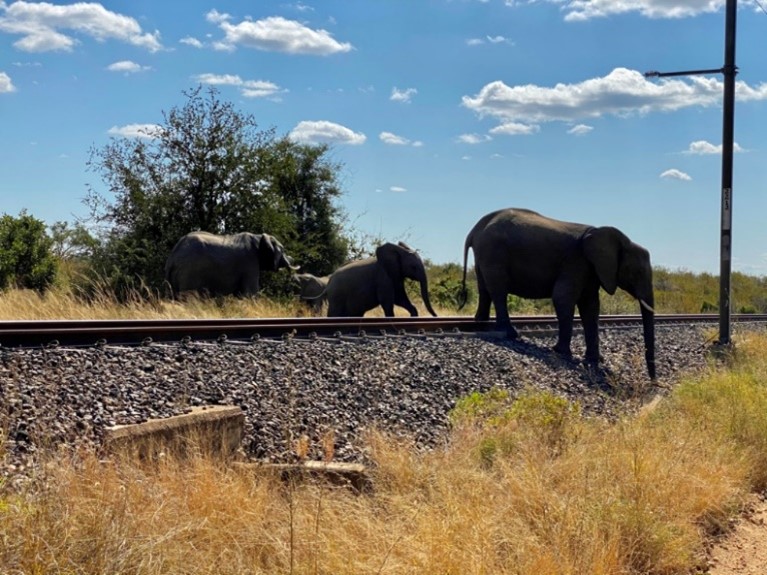 Transport infrastructure plays a pivotal role in economic and social development through creating improved access to resources and associated livelihood provided. Railways are a critical component of sustainable transportation, having many environmental and economic advantages over other forms of transport, and are therefore seeing massive expansion globally. In Africa, more than 30 massive development corridors, including rail infrastructure, are planned or progressing, with the rail footprint on the continent expected to increase by 85% in the coming years. However, these corridors will pass through hundreds of protected areas containing some of Earth’s most diverse and sensitive ecosystems.

As conservationists, we are concerned about two key ecological impacts of railways: the barrier effects and resultant habitat fragmentation it may cause for local wildlife populations and the mortality it might cause through wildlife-train collisions. For some animals, like the elephants above, the railway does not create a barrier in the landscape, and they are often seen simply walking over it. But this means they are in danger of collisions with trains – which, unlike cars, cannot quickly slow down or swerve to avoid a collision.

But what if animals could find a safe passage across the railway without the risk of collisions, which would increase the permeability of the rail corridor and improve habitat connectivity? Wildlife crossing structures provide just that, and luckily culverts or viaducts are a common design feature of all railways, typically built for drainage and topographical purposes. These pre-existing underpass structures can easily be modified to improve their use by wildlife, which is regarded as the most economical and feasible form of mitigation for wildlife mortality and barrier effects. The economic advantages of this approach do not stop there: train collisions with large mammals can be incredibly expensive, invariably damaging or derailing trains and often resulting in large-scale service disruptions.

Hannah is researching the use of railway underpasses and drainage culverts (such as the one seen on the left in the photo of elephants crossing the railway) by large mammals in the Balule Nature Reserve. She is putting up camera traps at the underpass entrances to understand which species use them (or don’t use them) and see how the structural dimensions, the nature of the habitat close to the structure, the surrounding landscape and mammal characteristics affect usage.

The findings of this study will help inform the design of underpasses along new railways in the African context and aid reserve management in decisions regarding economically feasible modifications to culverts along existing railway lines that would make them more attractive for large mammal use.

This project is supervised by Gabi Teren (from the EWT’s National Business and Biodiversity Network) and Francesca Parrini (University of the Witwatersrand), and advised by Wendy Collinson (EWT Wildlife and Transport Programme), Paul Allin (Transfrontier Africa, Balule), and Dr Manisha Bhardwaj (Swedish University of Agricultural Sciences).