TALE FROM THE FIELD

THE FIRST SIGHTING OF AN EGYPTIAN VULTURE IN MALAWI 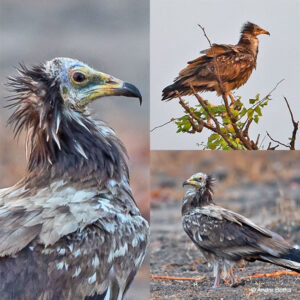 On 5 November 2022, my colleagues from the Lilongwe Wildlife Trust and African Parks and I were on our way to another day of vulture fieldwork in the Liwonde National Park in Malawi. At approximately 05:10 am, the team came across the carcass of an old Waterbuck ram that was one of the many casualties of the late dry season at this time of year. The carcass had attracted the attention of a handful of African White-backed Vultures, an adult Palm-nut Vulture, and another bird, all of whom flew off and out of sight as soon as the vehicle was in sight. Fortunately, this bird flew in a wide circle before returning to the carcass, where it was identified as a three-year-old Egyptian Vulture. Following an extensive literature search and input from various individuals working on the species, it seems this is the first reported record of this species for Malawi. The same bird was subsequently seen in the vicinity for another three days before the team moved their fieldwork site to a different location. Within the same timeframe, two more sightings of different individuals of this species were made in the South Luangwa- and Kafue National Parks in Zambia, indicating a small influx of this species into southern Africa, possibly by over-wintering birds that migrated from Eurasia. The Egyptian Vulture has been considered regionally extinct as a breeding species in southern Africa, and the last breeding record for this Endangered species in South Africa dates back to 1923, almost 100 years ago.

For more information about the Egyptian Vulture, please visit our Vultures for Africa page on the EWT website.