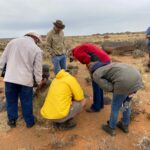 The EWT Drylands Conservation Programme, in partnership with the Grootfontein Agricultural Institute, held Karoo bossie (vegetation) identification days around Loxton this week. Altogether 32 people, mostly farmers, attended the sessions. Karoo veld generally appears rather grey and uninteresting to many passers-by, and getting to know the different species, mostly dwarf shrubs, can be very challenging at the best of times as they tend to look rather similar at first glance. For the novice, in order not to get demotivated on the first day, it is best to go in Spring and Autumn. At these times, if there has been rain, the bossies (little bushes) may be flowering and seeding, making it a lot easier to identify them. Once you spend time in the veld, you realise that there is actually a great deal of plant diversity, including over 3,000 species in the Nama Karoo. Not bad for a desert! 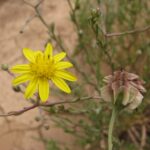 If you dare get up close and personal with the larger, thorny, rather formidable-looking bushes, you realise that they shelter a range of other fascinating species, which is why they are often called “mother bushes”. Despite the rather barren appearance of Karoo veld, when the veld is managed sustainably, the rangeland will provide fodder for wildlife and livestock year-round, as there is always something growing in every season. Grasses, which are less common as one travels west across the Karoo, are nonetheless an important component of the Karoo veld. Years of good early summer rainfall will result in a good grass component. On the other hand, the shrubs tend to prefer the cooler, wetter periods, providing valuable fodder during Autumn and Winter. 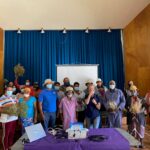 The plant identification sessions give farmers the opportunity to share their knowledge of the species growing in their area and encourage and facilitate more effective management of the veld, ensuring that the important palatable species are grazed with care, species diversity is promoted, and effective rest periods are implemented. These sessions formed part of the Karoo Forever Project, which focuses on promoting sustainable land management in the Karoo. The project is funded by the Global Environment Facility and managed by the United Nations Development Programme, in partnership with the Department of Environment, Forestry, and Fisheries, and the Department of Agriculture, Land Reform, and Rural Development.