Vincent van der Merwe, EWT Carnivore Conservation Programme, Cheetah Metapopulation Coordinator, vincentv@ewt.org.za, and Stephan Prins, Dinokeng Game Reserve Conservation Manager If you told me fifteen years ago that there would be a 19,000 hectare Big Five game reserve 30 minutes from Pretoria, supporting a wild Cheetah population of 25 individuals, I would have laughed at you. However, it is now May 2021, and exactly that has happened. Although Dinokeng Game Reserve management has reintroduced several historically occurring large mammals, its Cheetah reintroduction has been particularly successful. This must-tell story documents Dinokeng’s contribution to the conservation of Africa’s most endangered cat species I first heard of Dinokeng Game Reserve (DGR) in 2007 whilst working as a schoolteacher in Maputo, Mozambique. I was also doing some part-time environmental consultancy work and was contracted to conduct an Invertebrate Assessment for a proposed Big Five game reserve adjacent to Hammanskraal, a large township outside Pretoria. The idea was to have a Big Five game reserve in Gauteng for the 2010 World Cup football fans to visit. I conducted the assessment in 2008 and recall walking through the veld, hopping fences every few hundred meters. The place was riddled with old farm infrastructure, a rusted drum here, an old tyre there, and fences poles everywhere. I laughed off the idea of Lion, elephant, rhino, Leopard, and Cheetahs roaming an area largely transformed by 150 years of agriculture. The idea of reintroducing wildlife adjacent to one of the largest human settlements in South Africa just seemed a little far out, a little pie-in-the-sky.

Fast-forward four years and an MSc later, I found myself employed by the Endangered Wildlife Trust (EWT) as Cheetah Range Expansion Project Coordinator. I got a phone call from a gentleman called Ètienne Toerien: ‘Vince, we’re interested in reintroducing Cheetah’. Initially, sceptic, I mentioned that I was familiar with the area and would be sure to visit for a reintroduction feasibility assessment. I was dumbstruck by the fact that someone had actually managed to convince 126 landowners to drop fences and combine properties to form a sizeable conservation area. Dinokeng Game Reserve (DGR) is a fine example of what can be achieved when government and private initiatives join hands.

Regardless, there was plenty of scepticism. Many people imagine the bush as a place far away from home, at least Kruger Park distance away. The notion that the bush can be visited within Gauteng, thirty minutes away from Pretoria, appears to be a psychological barrier to many nature lovers. I recall a former colleague snubbing Dinokeng Game Reserve, saying, “How can you have a game reserve close to a densely populated area?”. People forget that just 150 years ago, one of the largest wildlife migrations in southern Africa took place in the vicinity of the DGR. The reserve lies on the Springbokvlakte (Springbok flats). The first colonial farmers that settled there reported massive herds of Springbok that took two days to pass by farmsteads. Whilst conducting the initial site visit, I drove through some absolutely beautiful parts of the DGR, rolling grasslands interspersed with Silver Cluster Leaf trees. The DGR represents a remarkable effort to restore the former ecological glory of the Springbokvlakte, and it was perfect for Cheetahs.

The next step was to set about finding a founder population of Cheetahs for the DGR. At that time, in early 2012, the metapopulation on fenced reserves had declined considerably. Forty-eight wild Cheetahs had just been sold to captivity to recover costs from a tourism industry struggling to cope with the after-effects of the global financial crisis. Although a nice lion-savvy female was sourced from Karongwe Game Reserve in the Lowveld, the only male available was an Eastern Cape runaway, the infamous Darlington male. He was not an ideal candidate for the DGR, having just escaped from Gondwana Game Reserve near Mossel Bay, whereafter he proceeded with a six-month trek over the Outeniqua Mountains, across the Karoo, and right through Addo Elephant National Park. After killing 34 goats, he was caught in a gin trap on a farm near Darlington.

I phoned Etienne and mentioned that I had managed to source a male, albeit a well-known problem animal. The founders were released onto the Dinokeng Game Reserve in late 2012, and by August 2013, the first litter of three was born. The reintroduction got off to a great start, but soon things started going pear-shaped. The Dinokeng Cheetahs started to escape repeatedly. On one occasion, the adult female and her three cubs were seen running northwards across the N1 highway, treating N1 traffic to what must have been a most amusing sighting. The helicopter costs associated with their recapture were starting to add up, and finally, after repeated stressful recaptures, we lost the Darlington male to immobilisation complications. It was a major setback, but the Darlington male had blessed us with some extraordinary genetics that persist in the metapopulation to this day. His daughter was relocated to Welgevonden in the Waterberg, and his two sons went to Madikwe to prevent inbreeding. After a few years on Madikwe, one of his sons was eventually relocated to Malawi, where he survives to this day. It is hard to imagine the young cub that crossed the N1 highway all those years back, now roaming the Miombo woodlands of Malawi.

To prevent a similar fate as the Darlington male, the Karongwe female was relocated to Mountain Zebra National Park in the Eastern Cape. We were back to zero on Dinokeng reserve. Wildlife reintroductions are a roller coaster ride with highs and lows! Regardless, Cheetah conservation had benefited from the initial reintroduction attempt. Four animals had come from two founders, suggesting that Dinokeng reserve was suitable for Cheetahs. We then moved to identify a new male coalition from Lalibela in the Eastern Cape for relocation to the DGR. These guys were a perfect fit. Although rarely seen by tourists, they lived for five years on the reserve. For some reason, they preferred the low prey density sourveld regions on the eastern side of the reserve Dinokeng. Shortly after their arrival, we sourced a female Cheetah from Rietvlei. Rietvlei is what we refer to as a soft reserve for Cheetah. Soft reserves have low densities of competing predators, including Lion, Leopard, Hyaena and Wild Dog. Rietvlei does not have any competing predators at all! Although the prospects of successful reintroduction were small, this was the only female available at the time. I remember following her post-release on Dinokeng. She persistently got herself cornered on the fenceline. I thought to myself that it was only a matter of time before a lion cornered her and finished her off.

Fortunately, we were completely wrong about the Rietvlei female…

For more on this epic tale of adaptation and survival against the odds, check our Wild Diaries for the next instalment! 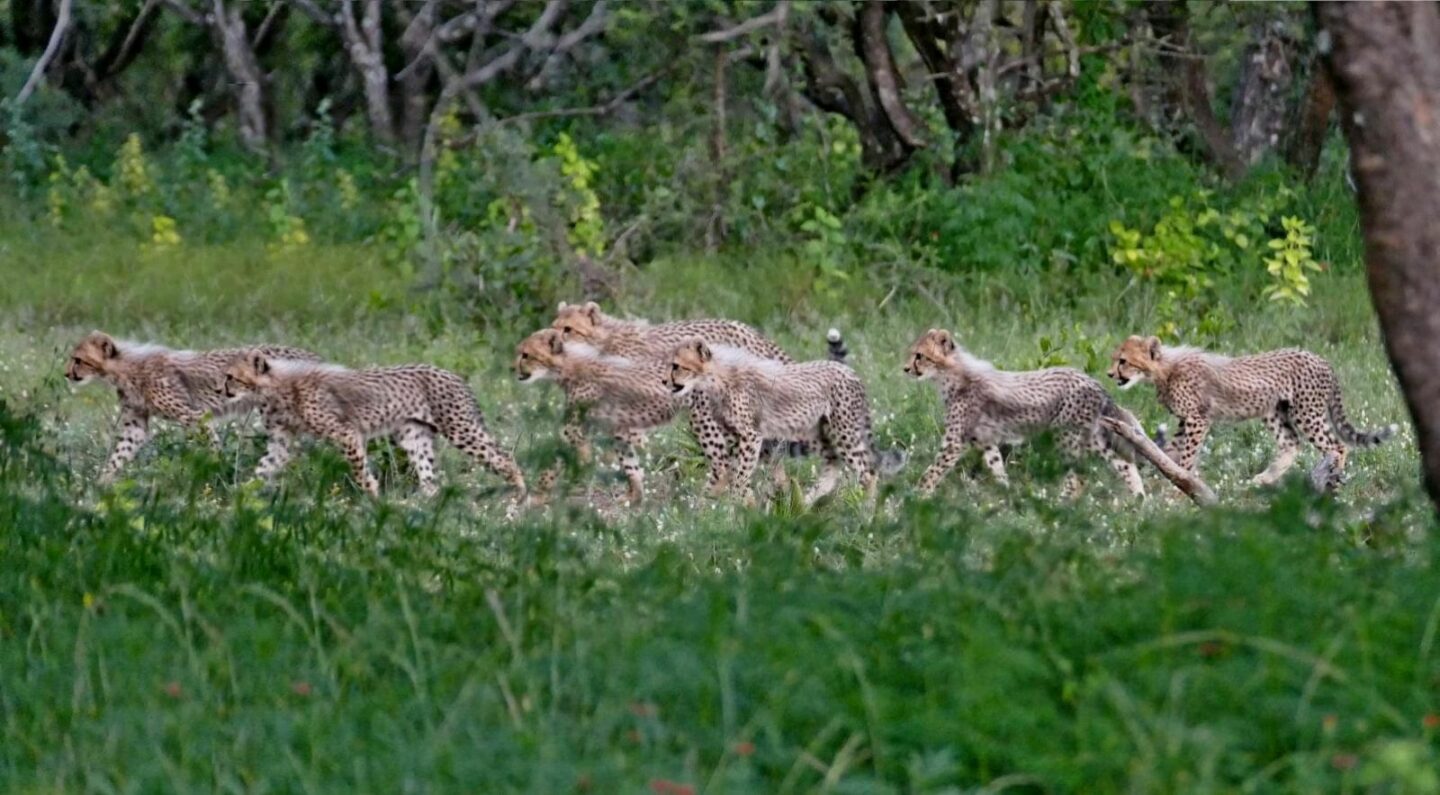