There aren’t many people who truly know how difficult it is to locate and sedate WILD Lions. The Endangered Wildlife Trust (EWT), SANParks, the National Administration of Conservation Areas in Mozambique, the Mozambique Wildlife Alliance, and Peace Parks Foundation are monitoring the distribution and movement of Lion prides across the Great Limpopo Transfrontier Conservation Area (GLTFCA) using GPS satellite collars. By monitoring prides over time, we can identify priority areas where Lions are likely to be at certain times, informing anti-poaching teams where to go to protect the Lions under their care. But to collar them, we need to find and sedate them. Not so hard, right? We are the most intelligent species, after all… 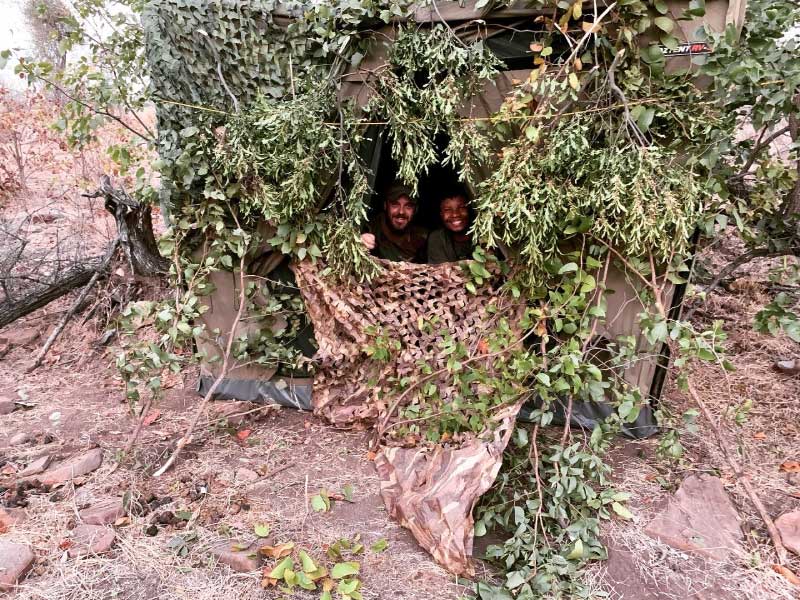 We’ve tried everything – including hiding and hoping the Lions wouldn’t know we were there so we could study them.

Alas, we have spent countless hours setting up the “perfect” trap, but these clever cats show us time after time just how intelligent they are. We searched on foot, by air, and yes – found a spoor here and there – but barely catch sight of them. My colleagues and I decided to set some bait for them, call them in using prey distress calls on a loudspeaker, and see if they were willing to participate in a feast.

We heard a Lion calling back softly, letting us know they were in the area, and we decided to head back to camp, shut off all the lights, and get an early one, so we could find them at the bait first thing. We did this so they wouldn’t feel threatened by our presence and leave the area before the vet arrived the following day. Plus, they’re always a little lazy after a meal, and we had set out a nice buffet for them.

I was woken up at 2 am by a roar near the camp. I was more excited than scared that this magnificent beast was so close by, not to mention relieved that they were indeed heading towards the bait…or so we assumed, not silly enough to leave the “safety” of my tent to check.

Early the next morning, we rose full of hope and energy and with a spring in our steps, knowing the Lions were close. We had no idea how close. We grabbed some hot coffee before sunrise and, at first light, decided to take a walk to the bait to see what transpired during the night. We took several steps, and then what had happened during the night hit us like a freight train.

These lions came to visit US before going to the bait. One got to within 3 m of my little tent, with two others approaching from the other side. We didn’t hear their footsteps. We didn’t smell them. We had no idea they were so close! With my knees a little shaky, I was truly humbled. But, it was an experience I will treasure forever – coming so close to the species I have dedicated my life to conserving.

How long will it take us to collar one? Find out in the next instalment of this epic tale.

Donate to save Lions here