Power line markers, such as flappers, are widely used to reduce or prevent bird collisions with power lines. However, few studies have robustly tested how effective they are in doing this. Power line collisions are an escalating problem for several threatened bird species endemic to southern Africa, as our powerline network continues to expand to meet the growing demand for electricity. Therefore, it is critical to know whether or not line marking works to adequately manage this problem and reduce the number of birds that are killed.

A recent paper published by Jessica Shaw from the FitzPatrick Institute of African Ornithology at the University of Cape Town, using EWT/ESKOM data, and coauthored by three EWT staff members, describes the results of a large scale eight-year experiment that tested the efficacy of the markers. The experiment was set up on 72 of 117 km of monitored transmission power lines in the eastern Karoo, South Africa, to assess whether line markers reduce bird collision mortality. The two bird species of particular interest were Blue Cranes (Anthropoides paradiseus) and Ludwig’s Bustards (Neotis ludwigii). Two different marking devices commonly used in South Africa were tested: bird flappers and static bird flight diverters.

The authors found that: 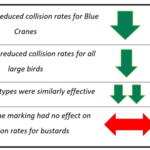 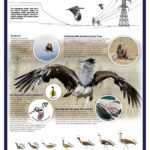 The monitoring conducted by the research team at this site also confirmed high levels of mortality of a range of species of conservation concern on unmarked lines. The authors, therefore, recommend that marking be widely installed on new power lines. However, other, more effective options need to be urgently explored to reduce collision mortality of bustards. Five different bustard species were in the top 10 list of most frequently found carcasses. High collision rates of Ludwig’s Bustards add to wider concerns about population-level effects for this range-restricted and Endangered species.