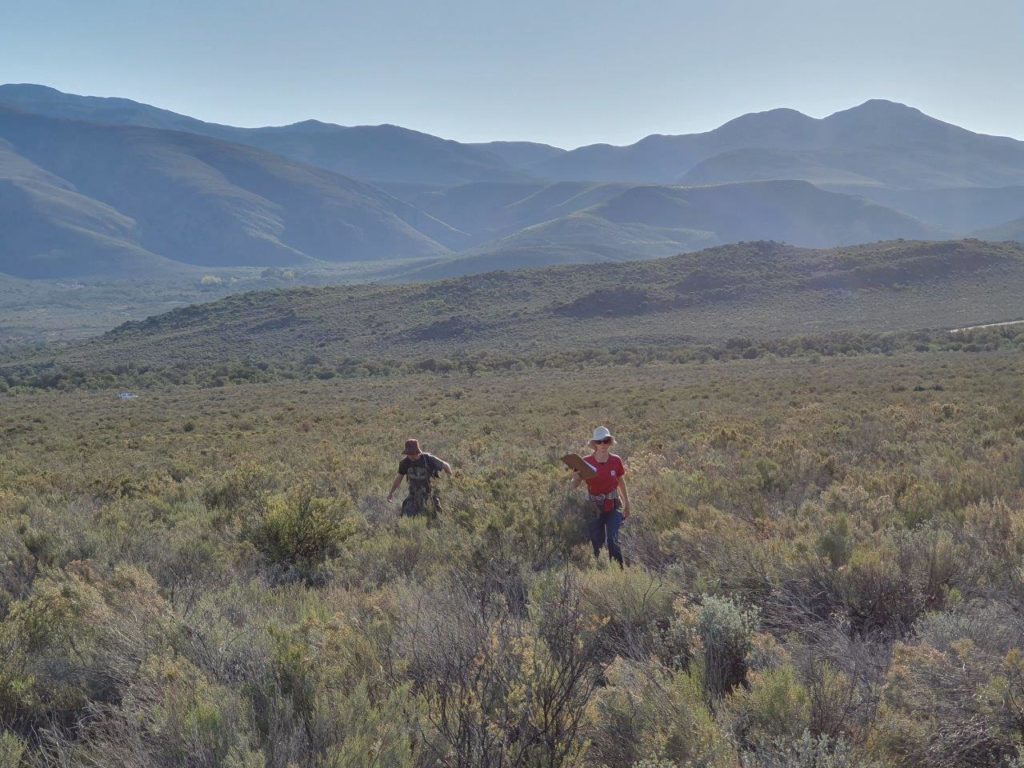 Cobus Theron, Manager, EWT Drylands Conservation ProgrammeThe Karoo is a vast and inspiring landscape. The extensive “rantjies” and “vlaktes” remind us that once there was a time when most of the earth was free of noise, pollution and human infrastructure. This seemingly harsh environment does however provide a home for many unique mammals, birds and reptiles. More often than not, the threatened and Endangered species of the Karoo are solitary, elusive and difficult to research and conserve.

The EWT’s Drylands Conservation Programme (DCP) is committed to researching and conserving some of these ‘hide and seek champions.’ “Developing and exploring new techniques to find, locate and study some of our target species is one of the major drivers of our work, and makes what we do innovative, exciting and pioneering,” says Este Matthew, the DCP’s Specialist Conservation Officer.

One of the most effective and reliable tools in the DCP’s arsenal of approaches is the use of camera traps. When searching for the presence of elusive species such as the Riverine Rabbit, the DCP uses up to 40 cameras arranged in clusters of up to five cameras. Cameras are kept in position for at least 40 days. Setting up cameras can be hard work as cameras, batteries, Y standards and a big hammer are often carried long distances from the vehicle. The correct orientation and placement of the cameras is important.While cameras need to be set up facing south (to avoid morning and evening glare from the sun), knowing where to place them is even more importan. 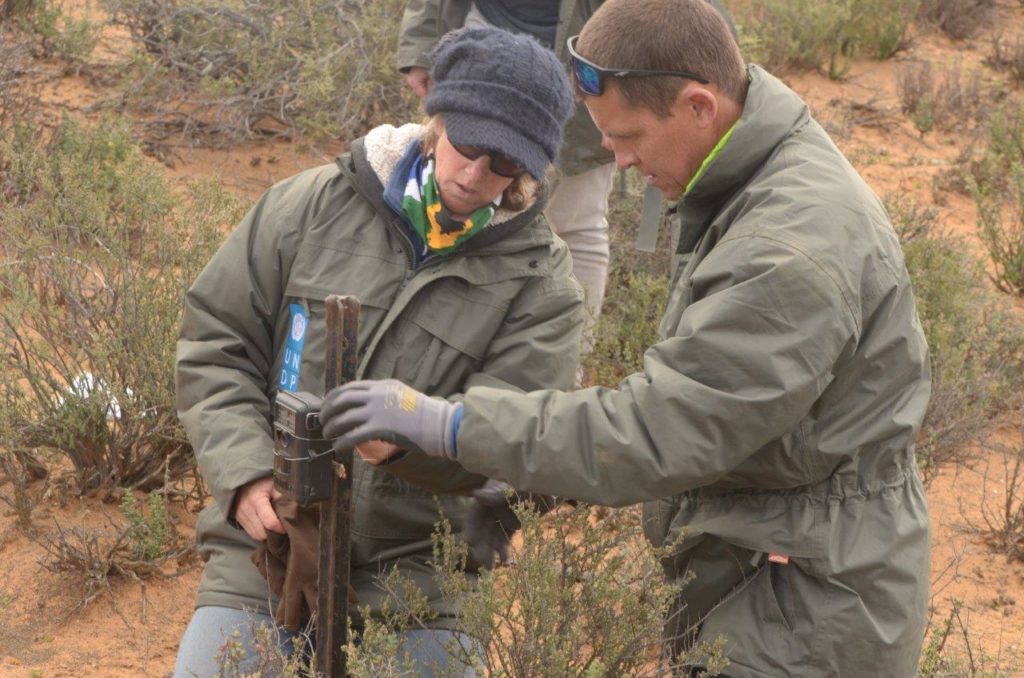 tFew people are better than our own Karoo expert, Bonnie Schumann, in placing these cameras in places most likely to capture secretive Karoo species. Observing Bonnie setting up cameras immediately reveals that science, observation and a highly focused intuition is key to Bonnie’s unrivalled success in setting cameras for Riverine Rabbits.

While cameras need to be set up facing south (to avoid morning and evening glare from the sun), knowing where to place them is even more importantFew people are better than our own Karoo expert, Bonnie Schumann, in placing these cameras in places most likely to capture secretive Karoo species. Observing Bonnie setting up cameras immediately reveals that science, observation and a highly focused intuition is key to Bonnie’s unrivalled success in setting cameras for Riverine Rabbits.

The cameras once again proved their worth In March 2019.  After a reported Riverine Rabbit roadkill in the Baviaanskloof the DCP set out to determine if the roadkill was an unusual event or if in fact the western parts of the Baivaanskloof had an active Riverine Rabbit population.

Over the course of two days the team set 12 clusters of between three and four cameras each. Each cluster was more than a kilometre apart (significant enough that a single Rabbit would not trigger cameras in two clusters). All the clusters are planned on a map in advance and situated on private land with the permission of the owners.  The cameras were then left for 50 days.

The team returned in May to collect the cameras and review the footage.  Excitement was high as we were hopeful for positive results.  Supper plans were postponed as memory cards were copied onto laptops and footage reviewed. All expectations were surpassed as more than eight of the 12 clusters had footage of Riverine Rabbits on them. Huge celebrations followed as the team confirmed a brand new population in a new geographic area for the Riverine Rabbit . 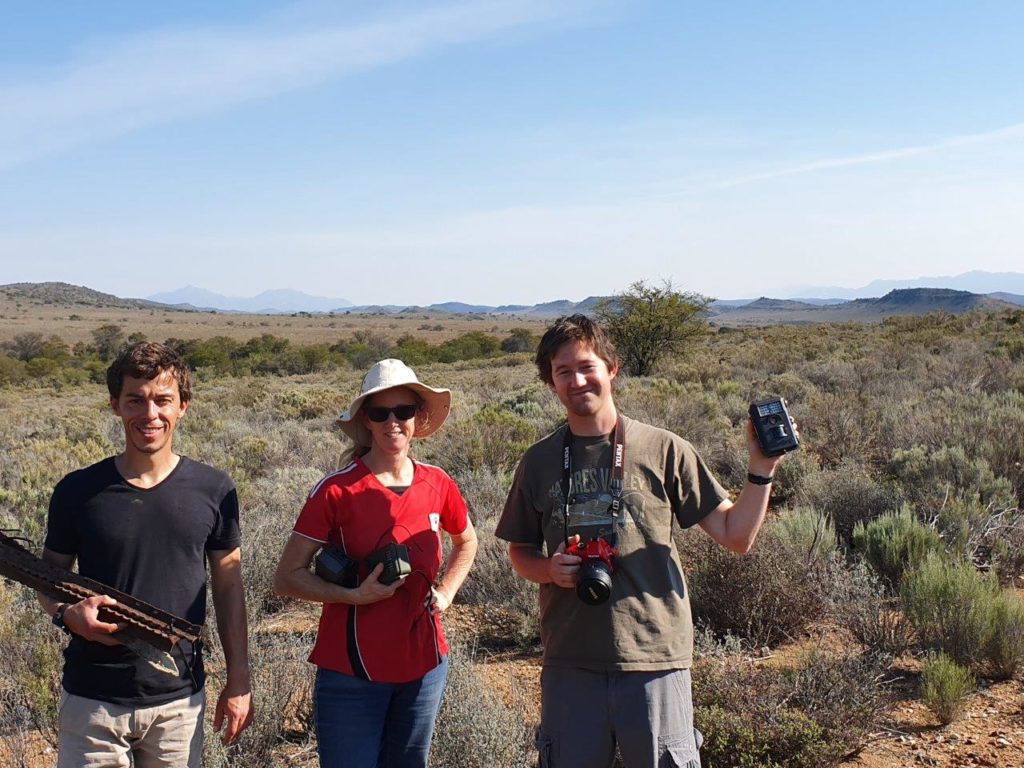 Collecting images is however only the first step in using camera trap data. Due to the fact that cameras are triggered by movement, each camera may take hundreds of pictures, often including wind or sheep triggered pictures. Sorting these pictures can be very time consuming.  The EWT is currently collaborating with the Liverpool University John Moores to develop a machine learning programme capable of identifying and sorting pictures according to species.  Once this machine learning software is perfected, we hope to get to a point where individuals of a species like Riverine Rabbits can be uniquely identified.

Camera trap information can also be used to calculate the density and area of occupation of species. Due to the additional information captured by the cameras – date, time, temperature; it is also possible to develop a better understanding of the activity patterns of certain species.