COLOUR CODING FOR CONSERVATION: ASSESSING THE RED LIST STATUS AND GREEN STATUS OF THE BLUE CRANE

Our National Bird, the Blue Crane, is an interesting species in the context of modern conservation. They occur in the eastern grasslands of South Africa, Karoo, and Western Cape, with a very small isolated population in northern Namibia (less than 50 cranes). Blue Cranes were once abundant in our eastern grasslands, but in the second half of the 20th century, degradation of these habitats led to a crash in the Blue Crane population – an estimated decline of around 90%. At much the same time, areas of Fynbos in the Western Cape were being rapidly transformed for cultivation, namely wheat and pastures. Blue Cranes found these cultivated lands enticing and flocked to the Western Cape. Their numbers increased so dramatically that we now estimate that over half of all Blue Cranes live in the Western Cape. 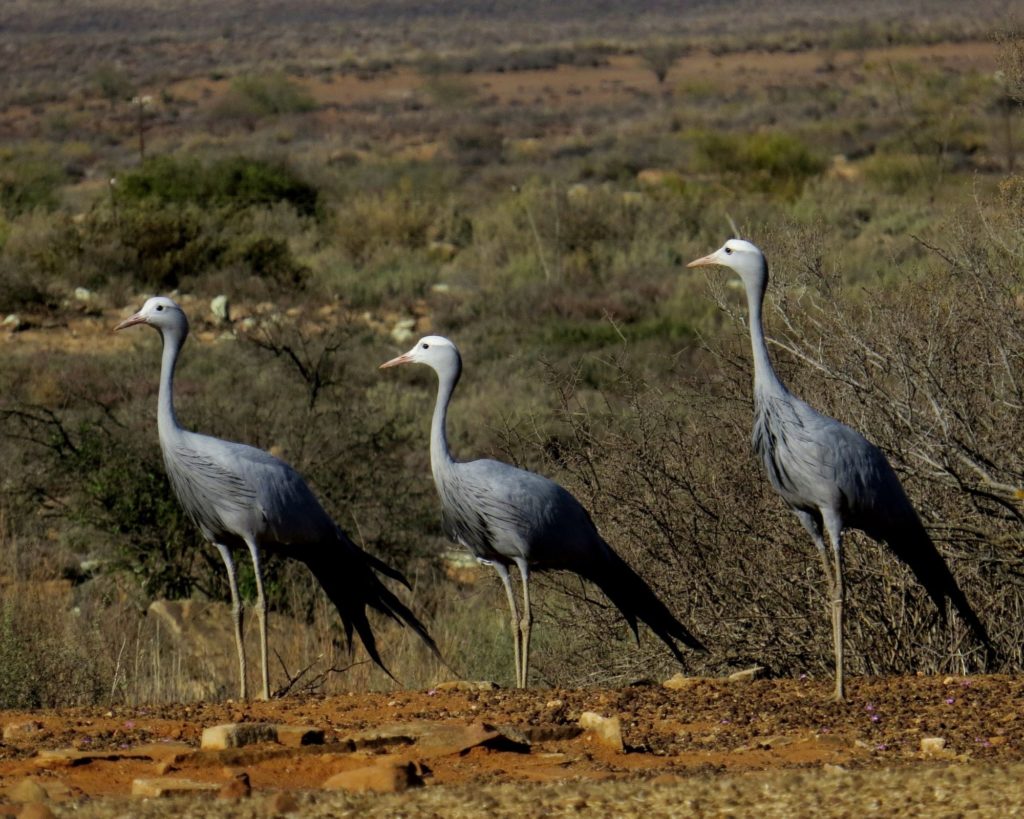 An intensively farmed agricultural landscape, such as those the Blue Cranes have chosen to occupy, can be a treacherous place for wildlife, and presents the cranes and conservationists working to protect the species with significant challenges. Threats rife in these areas include powerline collisions, fence entanglements, breeding disturbances, and occasionally conflict with farmers. Climate change and socio-economic factors placing further pressure on the agricultural landscape call into question the stability of this ‘artificial’ population. By contrast for example, the Karoo population experiences much less disturbance and as a result the population numbers have remained quite stable over the years.

The International Union for the Conservation of Nature (IUCN) Red List is a tool used to categorise the risk of extinction in species, and provides information on their range, population size, habitat and ecology, use and/or trade, threats, and existing conservation initiatives. The categories into which species are placed range in severity from Extinct, Extinct in the Wild, Critically Endangered, Endangered to Vulnerable. Species that are not yet considered threatened but have suffered some declines are categorised as Near-Threatened, while species that have healthy, stable populations are classified as Least Concern. The Red-Listing process is rigorous, and to inform the process biologists need reliable quantitative data to demonstrate actual or future declines in the species. The Blue Crane is listed on the global IUCN Red List as Vulnerable because of the declines in their grassland habitats and the rate of their population decline (30–50%) over three generations (39 years for Blue Crane).

The Red List is an incredibly useful tool for prioritising species for conservation action based on sound scientific evidence. However, it does have its limitations. As we see more positive impacts from conservation interventions, it is becoming clear that many species are in some way dependent on continued conservation efforts, and if these were to stop, the species population could once again begin to decline. These nuances are not accounted for in the red-listing process, which is what led the IUCN and other partners to establish the IUCN Green Status of Species. The Green Status is a way to categorise a species according to its recovery potential, its state of recovery, and its dependence on conservation. In December 2019, The Endangered Wildlife Trust’s African Crane Conservation Programme (EWT-ACCP) took part in a global project run by the IUCN to test the Green Status of real-world species. We ran through the process of assessing the Green Status of the Blue Crane, the results of which, as well as those for hundreds of other species across the globe, are being analysed by the IUCN and will soon be published for comment from the scientific community. We are very excited to have contributed to this exciting project, which will allow us to view threatened species not just in terms of their risk of extinction, but also of their recovery potential.

However, assessing the extinction risk of a species through the Red-List is, and will remain, an important part of understanding the conservation status of a species. In the case of the Blue Crane, with available data showing the population increasing in parts (Western Cape), and stable or slowly declining in others (Karoo and grasslands), it was proposed that the Blue Crane’s Red List status be down-listed from Vulnerable to Near-Threatened. This is every conservationist’s ultimate goal – to see species move down to less threatened categories. However, due to the population crash in the grasslands, and the uncertainty about the long-term viability of the Western Cape population, we considered the down-listing very carefully. In 2012 Sally Hofmeyr, a PhD student in the University of Cape Town’s Animal Demography Unit (ADU) undertook a detailed analysis of Blue Crane monitoring data collected by citizen scientists, which showed an increase overall for the Blue Crane population.  As this data are now almost 10 years old, I worked with Sally to update this analysis up until 2019. What we found was rather concerning, as in the last 10–14 years, the Western Cape population stabilised and then began to decline. In the Overberg, where we find the highest density of Blue Cranes, the population has been declining on average by 4% per annum since 2011. More than half of all Blue Cranes are found in the Western Cape, and if we continue to see even a lower rate of decline (2% per annum), we can still expect the global population to decline in the region of 32% over the next 39 years. Given this worrying trend in the Western Cape, the EWT, the International Crane Foundation (ICF), the IUCN Crane Specialist Group, CapeNature and the Fitz Patrick Institute motivated that the Blue Crane remain listed as Vulnerable. The reasons for the decline are unclear, but my PhD project is focused on better understanding the threats and opportunities this species faces in the Western Cape. Armed with this knowledge, we are in a better position to inform and prioritise conservation action to conserve our national bird. This research is funded by the Leiden Conservation Foundation, Eskom and Dave Myers.