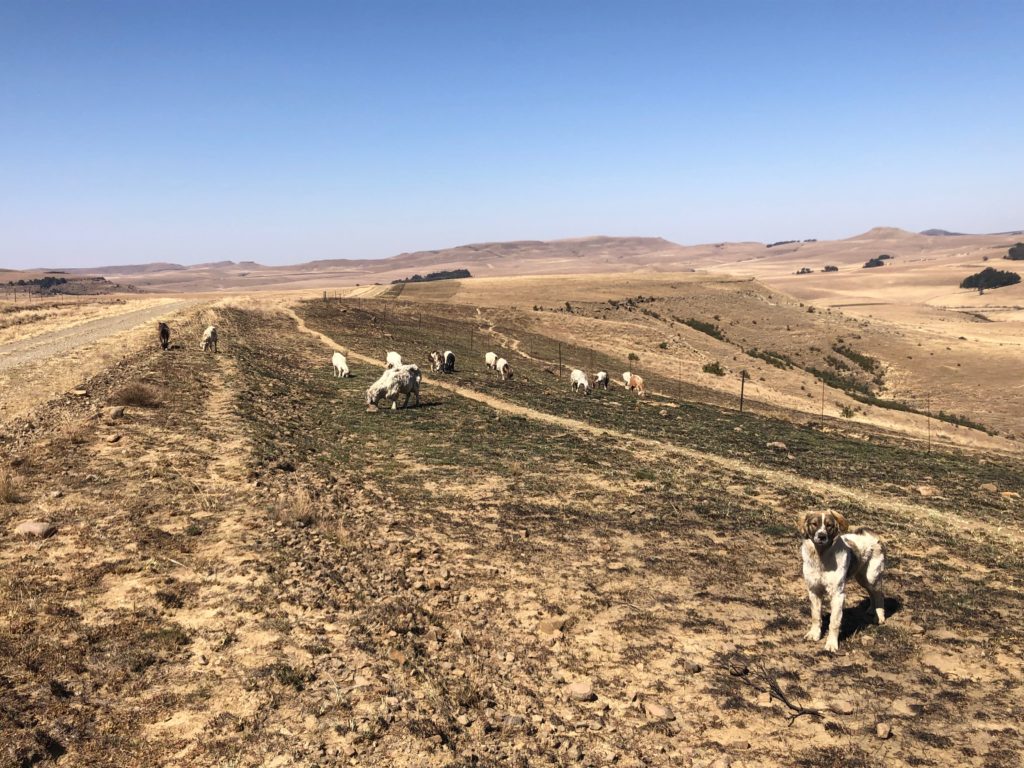 DerekV@ewt.org.za When Eskom was confronted with human-carnivore conflict issues at the flagship Ingula Pumped Storage Scheme in KZN South Africa, they approached the EWT to work together to find a solution. In January 2019, a massive step was taken to address human-carnivore conflict on the reserve due to the livestock losses resulting from carnivore predation.  In order to minimise stock losses and maintain good community relations, Eskom and the EWT placed five livestock guarding dogs at five selected families residing on the Ingula site. These community members are subsistence farmers living in homesteads created by Eskom on various parcels of land surrounding the Pumped Storage Scheme.

The Ingula community was experiencing considerable losses of livestock to predation, which was affecting their livelihoods. There had been no attempt to utilise any proactive conflict mitigation measures to reduce livestock predation with this community. Moreover, very few measures have been adopted in other rural communities in South Africa. This has provided us with a unique opportunity to introduce an effective non-lethal conflict control measure into a community and to up skill community members to implement the measure themselves. 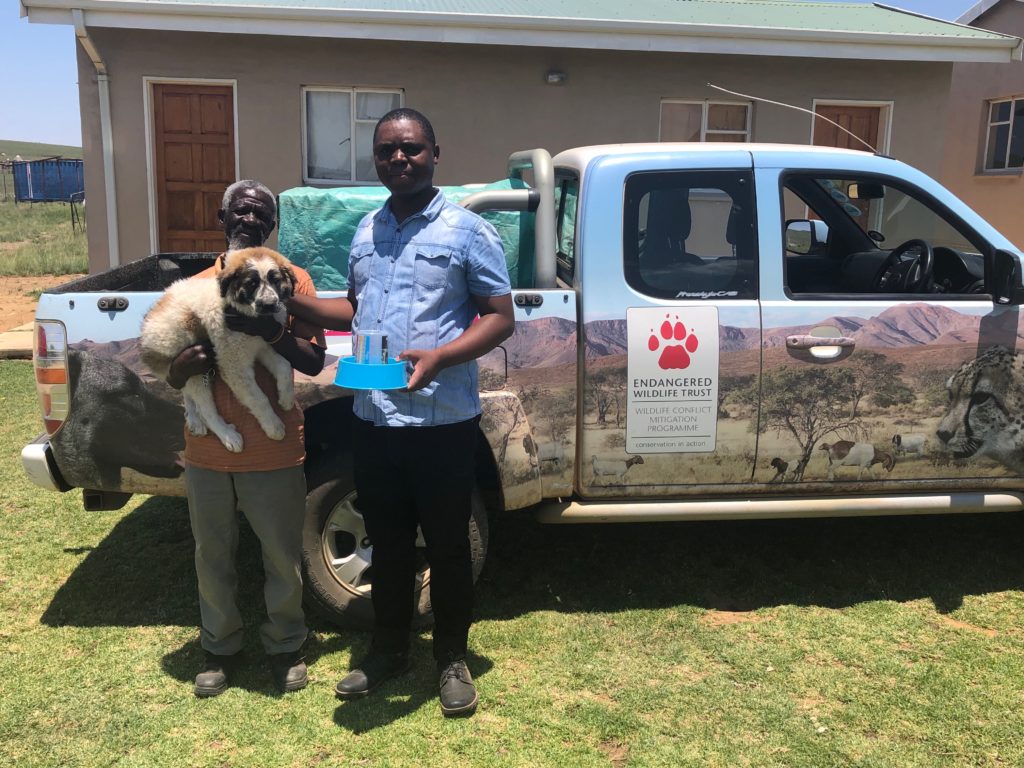 An intact carnivore guild is fundamental for healthy ecosystems. Carnivores are an important part of a healthy ecosystem, by predating on vulnerable prey, such as the old, injured, sick, or very young, leaving more food for the survival and prosperity of healthy prey animals, decreasing the chances of the spread of disease.   Carnivores help limit the growth of prey populations and prevent overgrazing of ranges ensuring that other negative impacts will be negated from the Ingula offset.

Worldwide, human-carnivore conflict is a leading threat to carnivores and the EWT is dedicated to resolving this. On South African agricultural land, conflict between humans and carnivores is rife and arises mainly from carnivore predation or the perception of predation on livestock. This usually leads to retaliatory killing of the suspected predators. Livestock predation can undoubtedly have a serious economic impact on livestock owners, and a wider impact on agricultural production and rural development. This conflict often takes the form of carnivores predating upon livestock, which was seen on site wherein members of the Ingula homestead project found dead livestock and the presence of carnivore predation. As such, it was imperative to ensure that both the community on site as well as the carnivores gain a solution to foster co-existence. Our project is assisting the community to live in harmony with carnivores and make livelihoods more profitable.

The Livestock Guarding Dog Project at Ingula has been a major success thus far. The project offers a long-term solution to secure valuable habitat for carnivore populations on Ingula Nature Reserve including leopards, Brown Hyaenas, Spotted Hyaenas, Black-backed Jackals, Serval and Caracal.  Since the implementation of our first five puppies in January this year only one sheep has been lost to carnivore predation. Some farmers at Ingula were losing over 20 livestock per annum to predation events before the project started. This has increased the tolerance levels of farmers towards carnivores, thus expanding the areas where these carnivores can safely roam. A win-win for both predators occurring on the Ingula reserve as well as community members who were experiencing unsustainable losses. 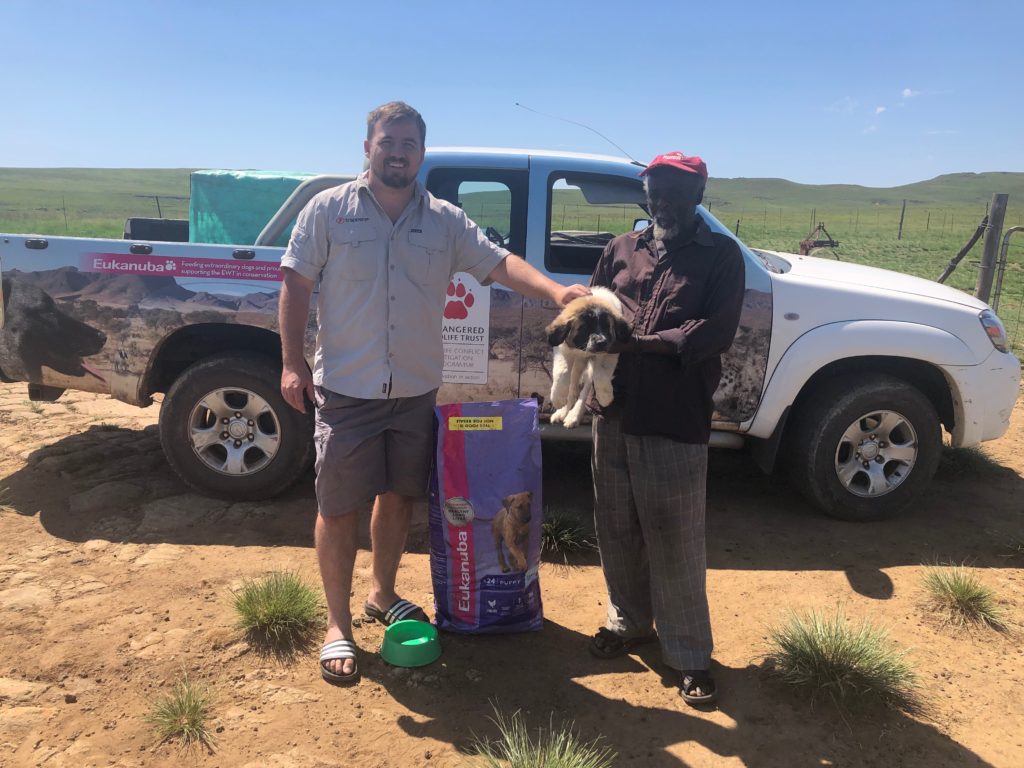 Going forward we will place another five Maluti livestock guardian dogs as well as five Alpacas to address livestock losses with community members as well as test the efficacy of these mitigation measures to determine what measures work best at Ingula. Community links are important to Eskom, as is the protection of biodiversity. This is especially important on sites such as Ingula, which was formally declared as a nature reserve in April 2018. By giving community members access to a resource such as the livestock guarding dogs as well as alpacas in the future, impacts on wildlife at the Ingula nature reserve will be greatly reduced..

This work is made possible by Eskom and Eukanuba

The EWT has been dealing with carnivore conflict and farmers for the past 40 years and has learned valuable lessons in the arena of preventing human-wildlife conflict. The EWT believes that prevention is better than cure and the solution that evolved from this realisation was the EWT’s Livestock Guarding Dog Project which deploys livestock guarding dogs such as the indigenous Maluti (Lesotho Highland dogs) and the Turkish Anatolian Shepherd, as well as more recently Alpacas onto farms in order to prevent loss of stock.  The EWT enters into a 12-month partnership agreement with the farmer that ensures the farmer’s compliance with the advice and assistance supplied by the EWT’s LGD Project staff and the health and wellbeing of the livestock guarding dog. This means that the canines are raised and integrated within the livestock herds according to proven protocols, which guarantees the success of the project.

Puppies from these breeds are taken to the farm and placed into a sheep, goat or cattle herd from a young age, where they interact and bond directly with the livestock. This introduction allows the herd to accept the puppy as one of their own and for the puppy, in turn, to grow up as a member of the flock. As the puppies grow up, they begin to fulfil their duty of protecting the herd against predator attacks by warning of predators in the vicinity and herding the animals away from the threat. These canines move and live with the grazing livestock as they traverse the farm.  The dog is placed as a deterrent and guardian and not an attack dog. The majority of predators, when faced with a worthy adversary, will not hesitate to back down and leave and this is the livestock guarding dog’s key strength. Through pure size, protectiveness of its livestock, and intimidation, he is able to passively defend his herd from being the next meal.