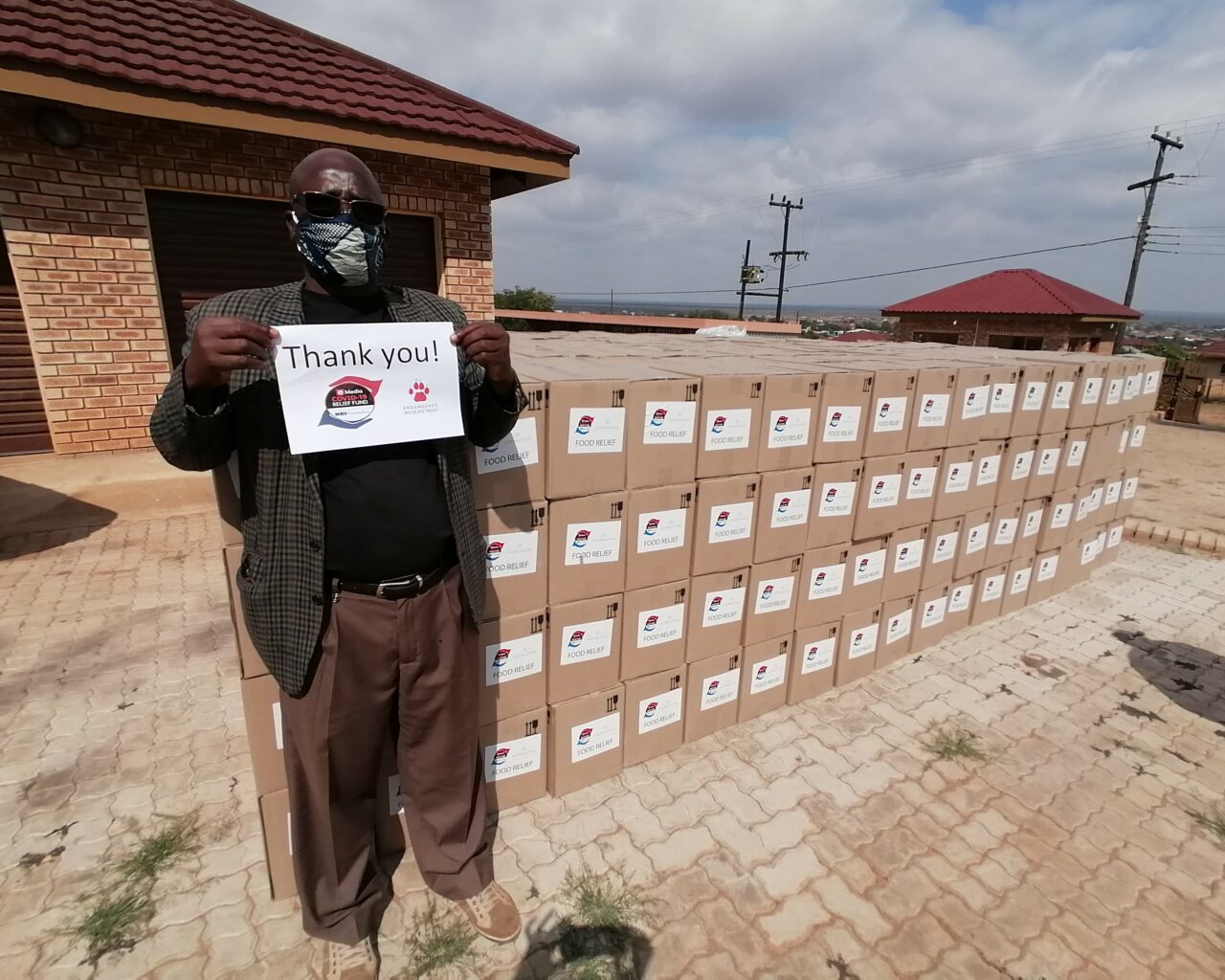 Adjusting to a new way of life during the lockdown period has been tough on all South Africans. While we are all enduring the same storm, we may not all be in the same boat. The COVID-19 crisis has hit many people hard, increasing job losses and further straining household resources. Many communities are currently experiencing extreme hardships through lack of basic resources. The Endangered Wildlife Trust (EWT) partnered with the HCI Foundation / eMedia COVID-19 Food Relief Fund to assist in eradicating hunger in vulnerable communities. The role of the EWT was to identify communities we have worked or are currently working with and ensure food parcels reached these groups.

The communities that the EWT works with range across South Africa, from the Soutpansberg, to the KwaZulu-Natal (KZN) Midlands, and all the way to Loxton in the Karoo. At the EWT-owned Medike Nature Reserve in the Soutpansberg, it was deemed essential that we play a role n help our neighbours, with the closest village being only 4km from Medike. The EWT’s Soutpansberg Protected Area (SPA) and the EWT’s People in Conservation (PIC) teams jumped into action. In collaboration with the traditional leadership structure of the Ha-Kutama Traditional Authority, we were able to provide 700 families from nine villages with food parcels, supporting approximately 3,000 people. The delivery was made to Chief Vele Prince Kutama, Mr Gilbert Muofhe, Chairperson of the Development Committee, and the headmen of the villages. We provided the members of the tribal authority with face masks and hand sanitiser, and explained the health and safety protocols to safely distribute the food boxes to the families. 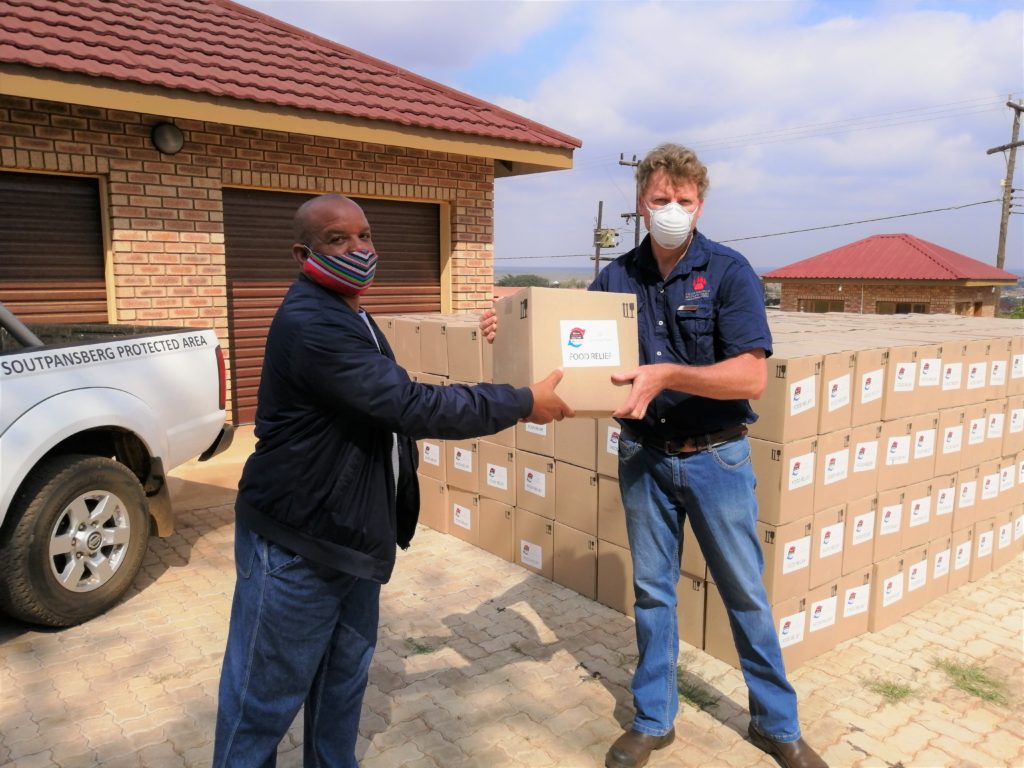 The EWT’s Drylands Conservation Programme (DCP) is embedded in the Loxton community of the Northern Cape. When the opportunity arose to be involved in distributing food parcels, the DCP team hopped into action. They involved the local social worker for the Department of Social Development, Rocco Olifant, as well as Fredeline Frieslaar who is the EWT-RMB Clever Rabbit learning support project assistant. Fredeline is  currently feeding children from her home as the closing of the local soup kitchen left many families unexpectedly without any way to feed their children. The local SAPS office was approached for permission to go out and they offered to assist with the distribution. Because the community is small, and distances short, the team was able to do a door to door delivery of 60 food parcels to the 60 families identified. Bonnie Schumann, the EWT’s Nama Karoo Coordinator, explained that, “The crisis the community is in is very personal for the DCP staff as this is a small community and everyone pretty much knows everyone. The people needing help are not anonymous names on a list, but well-known members of our community. There are some initiatives to help within the community, but the HCI donation was a great boost, both in terms of food and morale”. Within KwaZulu-Natal, the EWT’s African Crane Conservation Programme (ACCP) and PIC worked with local tribal authorities to distribute food parcels to communities with whom we work closely.  These communities partner with us to address catchment management issues, illegal poaching or hunting with dogs, and to raise awareness about the importance of a healthy environment for all. The food parcel deliveries were just a small way we could make people’s lives a little easier, and often involved our staff carrying boxes to the most remote of homes in each village. One particular community in KZN, KwaMkhize, ensured that the EWT team got their steps in. The rugged terrain and lack of roads meant that food parcels were hiked up to the houses. Ninety parcels were delivered over one and a half days! The team was assisted by the Chief Induna, Theo Sibisi, and two community members, Zinhle Ngwane and Londiwe Susibu.

Overall, a total of 1,203 food parcels was distributed. The distribution breakdown was as follows: 150 parcels in Loxton (Northern Cape), 700 parcels in the Soutpansberg (Limpopo), 240 parcels in the KZN Midlands, specifically Bulwer and KwaMkhize  (KZN), 54 parcels in Mqatsheni (Southern Drakensberg, KZN), and 59 parcels in the Normandien area (northern KZN). The EWT’s third strategic imperative, Benefiting People, sees us working towards improving the lives and wellbeing of thousands of people who are often the most vulnerable, but who also act as custodians of the ecosystems they live in and rely on. We were proud to have been part of this initiative, which enabled us to give back to those communities we work in. 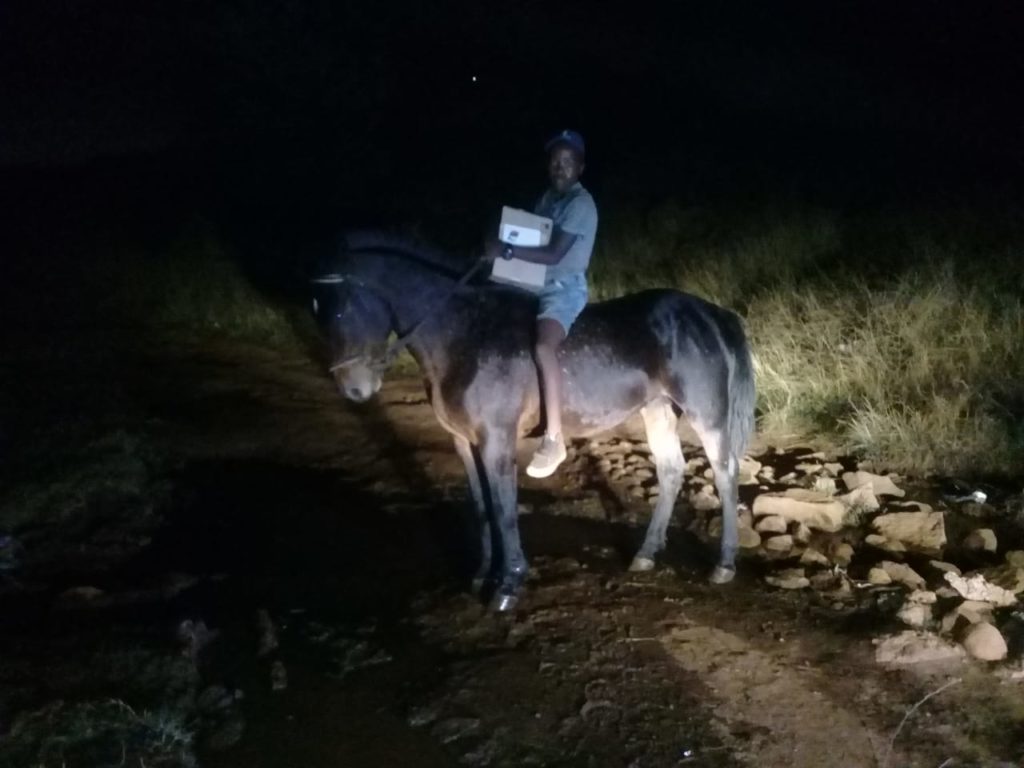 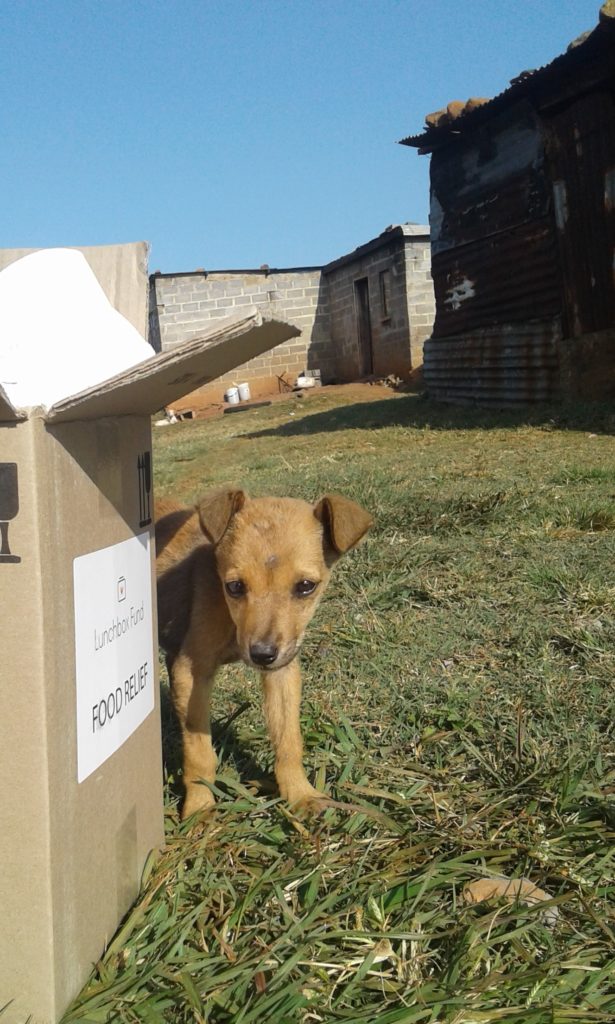