There is a pretty special place in the Klein Karoo where three biomes collide across a landscape of hidden valleys and impossibly rugged slopes. This “collision” of biomes, as renowned botanist Jan Vlok describes it, has resulted in a stunning array of biodiversity, ranging from fairy shrimps in shallow rock pools on remote mountain peaks to several undescribed plant species.

Previously valued purely for its livestock grazing attributes, Lettas Kraal has been quietly resting and recovering under Johan Roodt’s watchful eye for the last 25 years. Johan oversaw the final departure of the last of the goat and sheep herds that left their harsh mark on this unique and sensitive environment. Johan’s vision when he purchased Lettas Kraal was to dedicate the property to conserving the natural resources found here. The property is now being declared a Nature Reserve, which will secure Johan’s conservation vision for the property into perpetuity.

The Klein Karoo, hosting some 3,200 known plant species, is located in the Succulent Karoo, a plant biome recognised as an international biodiversity hotspot with over 6,300 plant species. Add a dash of Fynbos, and a touch of Subtropical Thicket to the Succulent Karoo and the species diversity explodes. This was confirmed by a recent five-day biodiversity survey, coordinated by the Endangered Wildlife Trust (EWT) and CapeNature, and supported by specialists and several volunteers.

Vlok put in a herculean effort, cataloguing an incredible 814 plant species in just under five days. These species occur in no less than nine vegetation units identified on the property. As expected, the winning family was the daisy family (Asteraceae) at 180 species. The most prominent genus is Crassula with a mindblowing 37 species! Astounding also are the 20 Pelargonium species and 18 Hermannia species. Vlok said afterwards, “No wonder my head was spinning at the end of the week! No ways that I could have hit more than 80% of the species, as I did not even cover 10% of the reserve’s area. This means that a true total count will be around 975 species. What can I say but ‘gee-whiz’, I would never have guessed that there would be that many – a total of about 10% of the species in the entire Cape Floristic Region. So who still says that arid areas are boring plant wise?” Besides the known species recorded so far, Vlok was last seen heading for the herbarium and his microscope, to identify several unknown plant treasures found on the property, some of which may turn out to be new species. 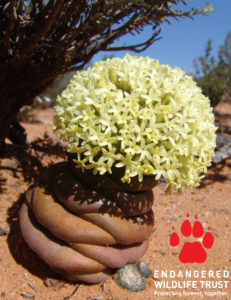 The discovery of a treasure trove of small mammal bones in an old barn owl roost in the God’s Window cave suggested that small mammals were far more abundant in the past. Going hand in hand with this, and demonstrating the domino effect when food chains are disrupted, few observations of birds of prey were made. However, on a positive note, and reflecting the resilience of dryland species, most of the small mammals that were caught were females, and many of them appeared to be pregnant; a good sign of things to come.

The work didn’t stop at sunset. Andre Fourie (a volunteer) and Marienne de Villiers (CapeNature) spent many night hours eavesdropping on bat conversations. These little flying mammals use echolocation to navigate, locate prey, and communicate, and most of their calls are at frequencies too high for human ears to detect. However, they can be picked up by an ultrasonic bat recorder, and the sonograms that these machines produce, provide clues to species identities. At least three bat species were detected in this way, but a more in-depth analysis of the data is likely to add to the list. Most of the bat activity was around the Lettaskraal homestead, where there is a permanent water supply and an abundance of bugs attracted to lights. A bonus find was a horseshoe bat in a narrow crevice near the God’s Window cave.

JP le Roux (EWT), and Martine Jordaan (CapeNature), led the search for all things aquatic, documenting four frog species and aquatic invertebrates. A little bit of water goes a long way in the Karoo, and JP, acting on a rumour of water on Bloutoring, a remote mountain peak, led the strenuous climb up this mountain in search of this “puddle”. The climb was not in vain and resulted in the discovery of fairy shrimps (Class Branchiopoda) in a single shallow rock pool.

The birders were not to be outdone as Renier Balt (volunteer), Dominic Henry, and Ian Little (EWT) vied for top recorder, while Stefan Theron (Dept Agriculture: LandCare, Western Cape) multi-tasked to assess priorities for restoration while making sure he got some birding in. Altogether 97 bird species were recorded on the property over the five days. A further 53 species recorded in the immediate area, including migrating visitors, bring the bird list total to 150 species.

Although it was a bit early in the season, as temperatures were still relatively low, Chair of the Lepidopterist’s Society of Africa, Andrew Morton, assisted by his son Sasha, managed to record some insect activity as well. It will be particularly interesting to do more extensive surveys of insects and other invertebrates when temperatures are warmer, as the diversity of species may well be correlated to the incredible plant species diversity.

The CapeNature Anysberg Nature Reserve team dubbed the “Klipspringers” for its members’ agility and speed on the steep slopes, provided both (hu)manpower and expertise to the survey effort. Volunteers Renier and Millene Balt, Sven Wesemann, Lara Krassnokutski, and Carina Becker (Manager of the Rooiberg Breede River Conservancy), supported by the Leslie Hill Succulent Karoo Trust from WWF-SA, provided additional logistical support and bucket-loads of enthusiasm during the survey.

The outstanding biodiversity on Lettas Kraal not only reflects the incredible biological wealth of the Klein Karoo as a region but again reiterates just how unique virtually every square kilometre of the entire Succulent Karoo is – no two areas are the same. The Succulent Karoo is threatened by mining activities, overgrazing, and the illegal collection of, and trade in, succulent plants, leaving less than 30% of the hotspot pristine. We must look at ways to conserve as much of this unique biome as possible, given that so much of it has already been transformed and degraded.

Where agriculture is being practised, we must explore ways to implement more sustainable land management that integrates the conservation of the remaining biodiversity with the agricultural priorities. Partnerships between landowners, CapeNature and NGOs such as the EWT, present a win-win solution for effectively conserving the region’s biodiversity. Together we can ensure a bright future for Lettas Kraal as a hub of biodiversity. Anyone spending time here cannot but help become a champion for the conservation of the Succulent Karoo.

The Endangered Wildlife Trust, Drylands Conservation Programme’s work is made possible through support and partnerships with landowners. In addition, our broader work in the Drylands landscape forms part of the Global Environment Facility (GEF5) funded Sustainable Land Management Project at the United Nations Development Programme (UNDP), in partnership with the Department of Forestry, Fisheries and the Environment (DFFE). Projects are also supported by Rand Merchant Bank.